A Little Gift for the Kitties

Need a little gift for a special kitty in your life? Here is my little Christmas gift to all of you... a pattern for a small catnip mouse that you can knit for that feline someone whom you love! It only takes about 20 minutes to knit one, so you have plenty of time to knit one for your kitty by Christmas!

I (of course) do not have a picture of this catnip delight, but I will add a picture when I get it. For the moment, imagine a rather fat Brown 'N Serve sausage, pointed on one end (for the nose), with a tail and two loops of yarn for ears. :D 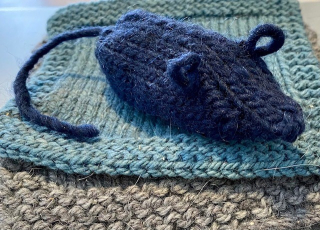 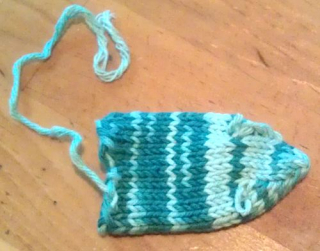 Yarn: Lush (50% wool/50% angora) by Classic Elite. I think one skein will make around 10 to 12 mice, maybe more. You could use any worsted weight yarn, but cats like angora blends.

Cast on 21 sts, leaving a long tail to sew up with later (and also it makes the mouse’s tail, too). Join into a circle and knit 16 rounds.

Repeat this decrease round until there are 7 sts left. Next round: knit 2 together three times, knit one. Cut yarn, leaving a long tail which you then thread onto a darning needle and pull through the remaining 4 sts. Pull them up tight, and then pull this yarn to the inside, to make little loops for ears at the beginning of the decrease rounds, tacking each loop in place. (You can just secure this on the inside and leave the ears off if you don’t want to bother with the ears. My cat likes to pull at the ears with her teeth. It gives her something to do.)

Thread the cast-on tail onto a darning needle and run it in and out around the cast on edge, making a mini drawstring bag sort of thing. Fill the mouse with catnip or, if you prefer, fiberfill stuffing (some cats are on a no-catnip diet, having abused the substance at some point in life, no doubt.) Pull on the cast-on tail, closing the drawstring tight; tack in place several times to secure the opening, making it as tightly closed as possible and leaving the tail outside. Tie a little knot about half an inch from the end of the tail so you’ll have something to hold onto as you dangle the little critter in front of the cat. Or you may want to just throw it on the floor and stand back.

Oh Beth! You need a picture because they are so irresistibly cute!