What is it? It's a modular knit scrap blanket to use up all the yarn scraps that I have accumulated. I am knitting one square a day, in the mornings, mindfully focusing my thoughts to create peace (in my mind) and healing (because I still am healing after my stroke six years ago).

I'm using a size 8 needle (5.0 mm), and worsted weight-ish yarn. I begin each square by casting on 36 stitches.

I am loosely using the Memory Blanket pattern that I found on Ravelry, but I am orienting the squares as diamonds rather than squares. I am weaving in all ends as I go. I will knit “Square One” squares until the blanket is wide enough, and then I’ll knit the rest of the diamonds as “Square Four” until the blanket is long enough. I will see how long it takes me doing one square a day to get a blanket!

In other news, I finished the Casu Cowl with my handspun yarn:

I also finished a lovely vest for my husband:

It looks better on him than it does on my laptop. The pattern is "Matthew's Vest", from Green Gables Knits: Patterns for Kindred Spirits, a Christmas gift from my dear sister in law. The yarn, an 80% locally grown alpaca from an alpaca named Riata with 20% bamboo added to it, is from the Maine Alpaca Experience. The bamboo gives it a nice drape. It is supposed to be worsted weight but it seems a bit thin to me ... however, it worked up fine (after I got it made into balls; what a nightmare! Thanks to Lynne who helped me untangle it!). It makes a lightweight but warm vest, and the yarn looks very classy indeed.

Amy's Scarf is coming along nicely ... slowly, but nicely:

There are a couple other things, but I can't show them til later. They are secret. Shhhh.

The Magic of Coffee Flour

People who know me know that I love coffee. I adore it, I live for it, it makes me happy. So, I was pretty chuffed when I  heard about coffee flour.

Coffee flour is produced from milling the fruit, rather than the seed of a coffee plant. Usually, the fruit is a waste product, discarded as a useless byproduct that clogs up the environment. Imagine if apple  seeds were the only part used, and the apple part itself was discarded and left to rot. Pretty messy, right?

Well, Dan Belliveau, a former technical services director at Starbucks, along with other tech guys and engineers, figured that coffee berries were good for something else besides piles of garbage or rotting in the rivers. They milled the coffee berries into flour. They didn't expect to make it available on the retail market, but somehow it ended up on Nuts.com and voilá: my coffee world is complete.

Coffee flour doesn't taste like coffee. It has a deep, rich flavor that is sort of ... brown. Burgundy brown. I've heard that it is good in smoothies, soups, and sauces, and I will try that out, especially the smoothie part. A tablespoon has 34 little calories, 5 grams of dietary fiber (both insoluble and soluble so your tummy will love you), is rich in potassium and iron, and has more antioxidants per gram than pomegranates. It is high in protein and potassium. Throw in the fact that it is low-sodium, fat-free, gluten-free, is paleo and vegan friendly, and makes the environment better: coffee flour attains food nirvana -- and not just because it comes from coffee!

I ordered it from Nuts.com, getting a 12 ounce bag for $6.99, just to try it out. I read that coffee flour isn't exactly like regular all-purpose flour or whole wheat flour, it is more like soy or almond flour. You should mix it with other flours, about 10% to 30% coffee to 90% -70% other. You have to find the right blend for you. In texture, it is kind of like cocoa powder both in color and feel, though cocoa powder is finer.

The first thing I tried it out on was this recipe from allrecipes.com called "Apple Cinnamon White Cake". Pay no attention to the name. I used it as a base to make a loaf of apple bread. I chose it because it was low calorie, had the mix of apples, brown sugar, butter and flour I wanted. The mix of flour that I had on hand was milled einkorn flour, soy flour, and coffee flour. I baked it in a loaf pan, and it came out pretty good, as an apple bread sort of thing for breakfast. But it really didn't have enough taste. So I tried again.

This time I used a molasses cookie recipe from allrecipes.com that looked like a good recipe. I mean, how can you screw up molasses cookies, right? The first batch, I rolled into balls and sugar like they said in the recipe, but they didn't flatten out at all. Doesn't matter! They tasted great! They are like little molasses doughnut holes. The rest of the cookies I flattened out after I rolled them in sugar, so they looked better. And they still tasted great!

If you have coffee flour and soy flour and almond flour, you can make my version of Molasses Cookies too. 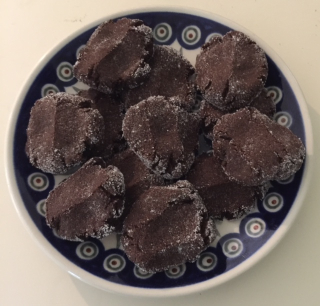 3/4 cup coconut oil, melted (or any combination of butter and coconut oil)