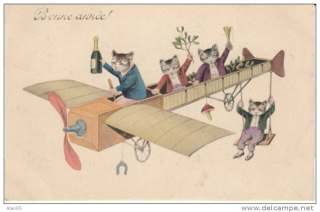 Christmas is over with! Let the rabble-rousing commence! Like swinging from the tail of an airplane! With a mushroom and a horsehoe! And champagne! I hope the olive branch means peace :)

I got a few things done for Christmas this year that I couldn't show you, but now I can.

I made a couple sweaters and a shawl and a pair of socks for a lovely woman who married my nephew:

The black cardigan sweater was finished. I neglected to get a picture of it though. Well, I thought I got a picture, but it has since disappeared into the ether that seems to make lots of my things disappear. It is quite magical how that happens, really. The patterns I used were from left to right, Anne's Sweater by Joanna Johnston, After the Rain by Heidi Kirrmaier, Wintersweet from Boo Knits, and Kethry by Spillyjane.

I knit a hippo for my husband, because who doesn't want a hippopotamus for Christmas??? Pattern is Hippo Knitting Pattern by Linda Dawkins. 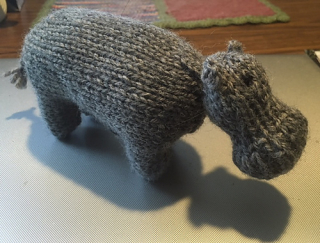 I knit my brother a pair of socks. I hope his feet will stay warm this winter!

My Peace Project got finished last night, only nine days after the Solstice. I love it! It is so pretty! 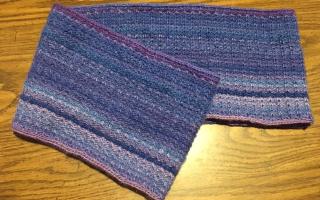 So, now I am working on Sylvi. You remember Sylvi? I got the sleeves done and I am about a third of the way up the back: 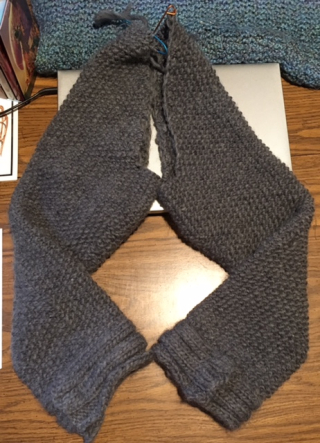 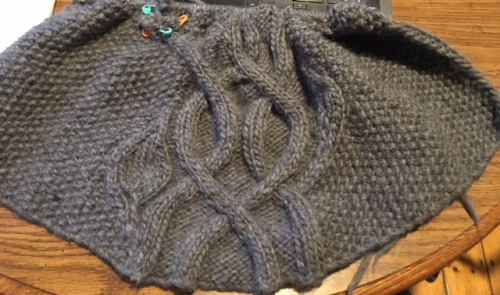 The picture is kind of squished on my needles. The markers show where I will pick up the stitches to knit the flower petals later. I am really loving this project!! In a way I wish it was on smaller needles; it's on size 13 needles for me, to get the gauge. But, you can really knit this baby fast on size 13 needles and bulky weight wool! The whole chart for the back is only 157 rows. I love it! It will be done soon, but I have lots of stuff to knit that will be just as much fun!

Happy Winter Solstice! Here is to the shortest day of the year. Let the advancing hours of daylight begin! 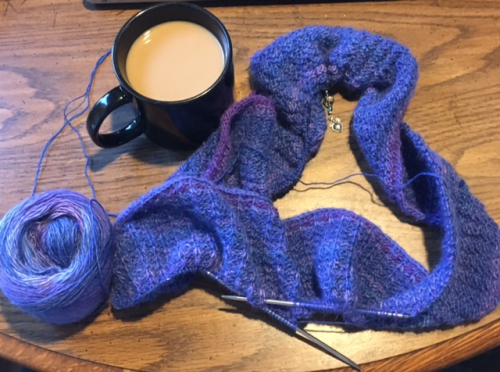 How is your Peace Project cowl commencing? I am very happy with mine. The Wildwood Arcadia yarn is knitting up beautifully, and the pattern has a nice rhythm to it that is gentle, yet produces a look that suits my variegated yarn. I love it.

I got started late, so my cowl isn't finished; it's a little over halfway to being done, and that is okay. I love knitting it.

One of the things that slowed me down a bit was that I chose to start it with an I-cord cast on, which made a lovely little tubular edge that I like a lot!

It took me a day to cast on all the over 300 stitches this way, but it turned out nicely. I plan to cast off with an I-cord bind off as well, making both edges match.

I hope your Peace Project Cowl is giving you a bit of peace this holiday season!

Posted at 08:51 AM in -Alongs, Beth's Knitting Projects, Found on the Internet, Tips, Videos, Tutorials, How To | Permalink | Comments (0)

Sometimes a Trip Down Memory Lane Can Be Pretty Horrifying

And now, a word from a sponsor:

As an excuse, I can only say, it's cold. The frost has invaded my brain!

Posted at 01:55 PM in Art, Funny (In a Good Way), Interesting Fiber Stuff, Ramblings of a yarndemon, This Is Just Weird | Permalink | Comments (0)

Blogger Christina is trying to change the world, and I think she is succeeding. Her blog The Healthy Knitter is having a 21-day tips for peace during December, and it coincides with a "Peace-along" on Ravelry, with her free pattern for a lovely cowl. My Daily Mindfulness blanket has languished but it will still be there in January. I'm going to join her for the peace-along, and I urge you to join me too!

So far she has gotten over 20,000 people to read her peace tips every day and join her peace-along. That is 20,000 individual people whose lives she has impacted in  a good way, a peaceful way.

"And we need peace…with turmoil, and acts of violence, hatred and anger occurring daily in our country and throughout the world it’s time to take action. Often I think "but I’m just one person" but maybe, just maybe with Project Peace we can spread ideas on how to choose peace. Perhaps then, we can slowly make some changes. We’ll never overcome evil but we must find ways to cope with it."

So, what do you do? Here is what she said back in November:

Here's how you join in:

Will you help me promote this?

Here are some ideas on how you could spread the word:

Also, there is a World-wide Knit-in for Peace on December 21. Will you will knit for peace on that day?

I think this is a great idea! It is sort of like SETI, but instead of helping to locate alien signals, we will be promoting world peace! Using knitting needles! I can get behind that.

My project for peace will be Christina Campbell's cowl knit in Wildwood Yarns Arcadia in a pretty blue-pink-purple colorway. To me, it looks like peace.

Heck, whatever you do to be mindful and peaceful would work too! Whether you draw, crochet, quilt, craft, sew, doodle, whittle sticks or make baskets, just do it. Be peaceful, and help others be peaceful too!

Whoopsie, Thanksgiving and All of November Went By Fast!

Sorry I haven't posted in a month; I took part in NaNoWriMo (National Novel Writing Month).  I succeeded in finishing a 50,000 word novel ... well, it's really only a novella so far, but maybe it will be a novel someday. I got this:

In early November, I gave the cutest little 1-year old in the world this:

But, it almost didn't get made.   I started knitting it at the end of July, got down to the sleeves (it is knit from the top down), took the sleeve stitches off, and stopped. I decided at that point to look through the comments that other people who had knit it said. I expected them to say, "This is such a cute sweater!!!!!!" but no. Argggghhhhhh! Everyone said, "The neck is too big!"

I didn't really look at the neck, but once I did, I had to say, they were right. It was too big! Why didn't I read the comments before knitting so far? I really didn't want to unravel the whole thing and start over, even though I had time. Plus, I was mad for not reading the comments.  So I did the logical thing: I put it in a bag and threw it into The Chest of No Return, thinking it was a good color for socks maybe, after I got over being mad. I went on to knit other things, like an alpaca vest and a cowl. And while I knit, I thought about it, thought of different ways to fix it.

I determined to set about remedying the sweater. I cut one stitch and unpicked the neck just above the increases for the lace yoke pattern (this included taking off the row for the top buttonhole).

I put the stitches back on the needle, and knit the buttonhole row on the first row of knitting -- k 2, yo, k2tog, k1, then k2tog across the row til the last 5 sts, k5. Then I did 4 garter ridges, and bound off.

If I had it to do over again, I think I would have done k1, k2tog across instead of k2 tog across. K2tog across made it a little bit too small and made the lace pucker too much, but it looks ok. It would look better with a few more stitches.

But, the sweet little girl and her mommy love it, and I love that it turned out okay!