I started to knit Sylvi on October 22 and finished it on March 22, so it took a long time to get it done. However, I didn't work on it the whole time. I took a few long-term breaks to knit other things.

I knit the purple Ironwood Shawl that was in the KnitScene Spring 2017 magazine, out of Wildwood Yarns Arcadia in a pretty purple. The pattern called for two skeins of Madeline Tosh Sock, which has 385 yards and is about $25 a skein; I had one skein of the Arcadia and I didn't notice that the pattern called for two skeins. Arcadia has 394 yards per skein. I knit happily along, and about the time that I went to the Spa in Freeport I noticed that I was running a bit low on yarn, and that is when I saw that the pattern called for two skeins! I estimated that the amount of yarn I had would almost come close to finishing the shawl though, so I figured I would just put another color on whenever I ran out, something that would contrast nicely and look like I had planned it that way. When I got home, I rummaged through my odds and ends of sock yarns and found some pretty lavender handspun that I made eons ago, and set it aside.

But the ball kept going and going and going. It was a magic ball! Just two rows before the end of the shawl, I finally ran out of yarn. I knit the final two rows, bound off, and am quite happy with it. If I had forked out $50 for Madeline Tosh Sock yarn though, I would have been kind of mad that it had only required about fifteen yards of the second skein. 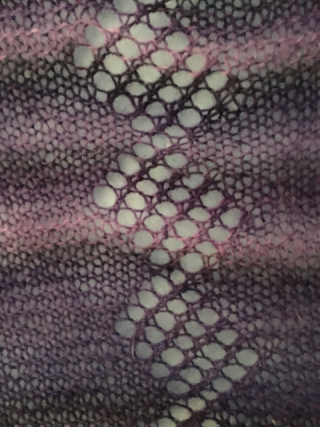 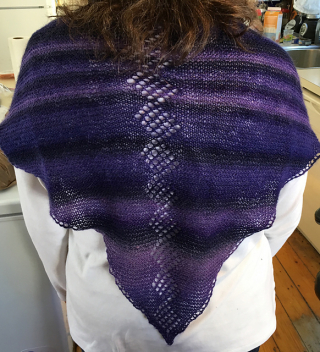 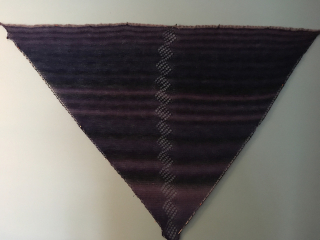 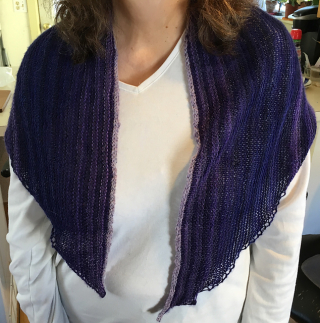 Beside the shawl, I knit a couple sweaters that I can't show you or talk about yet, and a bunch of hats: 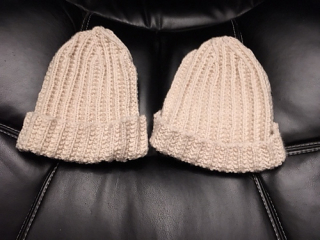 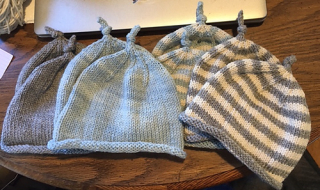 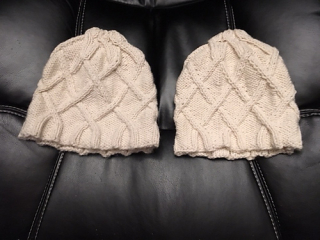 Then I designed and knit a cowl at the Harpswell Inn Knitting Weekend with yarn that was provided. It came out pretty and I'll put the picture and the pattern up here when I get the pattern written; the cowl is blocking now.

Another thing that I knit (that is still blocking) is a scarf/shawl that I recently completed. It was the Mystery in March KAL (yup, I got it done in March), a lovely asymmetrical piece in a sampler of various knitting stitches, by Tori Seierstad. The yarn I used was originally used in the Mystery Sock IX: Crazy Quilt Socks, done in Old Number 8 in a dark red yarn. After working three clues, I thought I would never wear those socks (the pattern was perfect, they just were nothing I would ever wear. Sorry.) So, when I saw the mystery shawl commencing, I ripped out the sock and started the shawl. It was a blast to knit! Pictures soon. :)

So what is on the needles now? The primary thing is Amy's Scarf, which is reinvigorated after a long hibernation that started at the end of October. I started it back in July! I have to get it done. It is inspired by the scarf that Amy Pond wore in two Dr. Who shows, and I have wanted it for years, ever since I saw it on Dr. Who. I bought just the right skein of lovely red at the Spa in 2016, a red called Rock Lobster, in Mad Color Fiber Arts Sonatina. I'm about half done! 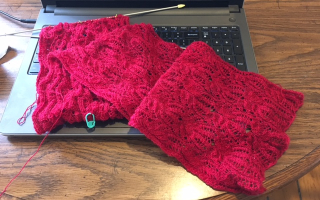