Backstory: In 2010 I had a pretty bad stroke, and I probably should have  died, but thanks to a series of remarkably lucky events I stayed alive. I learned to breathe and swallow, eventually moving from my bed to a wheelchair and then to a brace and cane. I got the use of some fingers back and can pinch a circular needle now. In short, I have spent the last seven years recovering from my stroke, and I still have a lot of improvement to go, but I am working on it.

My stroke paralyzed my right side, and I was right-handed, which meant that besides all the stuff that I needed to learn how to do all over again like breathing and swallowing, there was the added trauma of learning to do everything in life not only one-handed, but left-handed as well. Sometimes life just sucks so much. But, I'm still alive. Gotta love it.

Thanks to the fact that it was 2010, technology made it possible that I didn't have to learn to write. My occupational therapist let me focus on my knitting, and it was a good thing that she did. With the exception of the very rare occasions that I have had to legibly sign my name on paper (I can count on one hand how many times it was) I have never had to write anything by hand at all. Handwriting schmandwriting, we can all just keyboard. Keyboarding is faster and easier and more legible than handwriting anyway! Yay!

But in the back of my mind, a frown was growing. A feeling that I was not doing something important to learn for my mind and my well-being. I spent a lot of time ignoring it, and spent the time walking and improving my knitting. My knitting now is exactly as it was before my stroke. I am pleased with that.

But the frown in my mind had not abated, it had grown and time had not made it go away. The dark, seamy side of What Can't I Do suddenly took on a name: I couldn't handwrite. Everything else in life, I had made progress on, significant progress. But I couldn't handwrite a story neatly and legibly. For someone who had taught penmanship to junior high students (at least a little bit), that really grated on my nerves.

I was always the woman in love with journals and pencils and pens. I loved to write, I spent many happy hours writing my journal and my stories. I loved the feel of the pencil or the pen as it moved across the paper. As I hand-wrote, I could think about what it was that I wanted to say. You could say that my mind poured out through my pen onto my paper.

I had set up a thing with my sister who had been a primary school teacher, and I would write her a letter every week, and it seemed to help ... but then she died and I quit writing again. By this point it was 2015, five years after my stroke. I searched the internet for anything about learning to write and was met with thousands of second grade level happy little worksheets. I did some of them, but you know. I was 55 years old.  I determined to get a notebook and write every day.  Sadly, no one ever needed to have anything handwritten anymore. I despaired and flirted with depression. 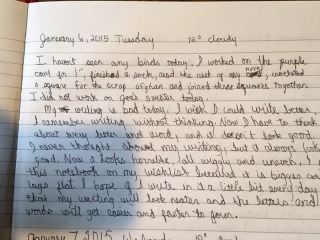 That is what I wrote on January 6, 2015. It is appallingly bad, especially when you realize I wrote it agonizingly slowly. I was writing at my best.

I wrote like that for a few months and quit. 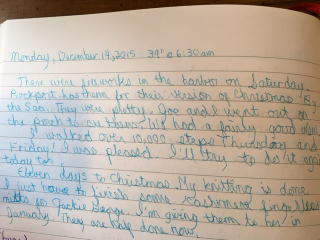 That is from December 14 of the same year. My handwriting was even worse.  So then I really quit. Quit quitter quit quit quit. There was still keyboarding, thank God.

I got into coloring books, thinking that that would help train my fingers to hold a pencil, and to my surprise I could color without making a mess of things: 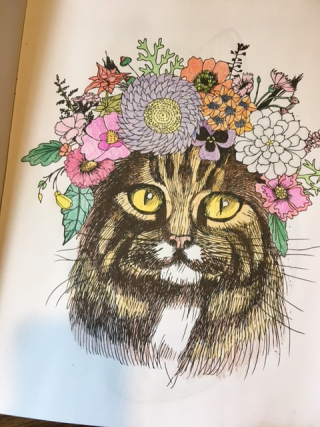 But, it was so slow that it wasn't any fun anymore. I started a couple more pictures and I quit. Again. 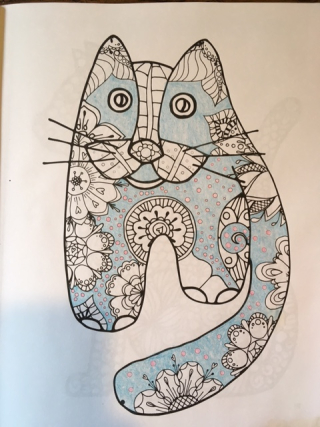 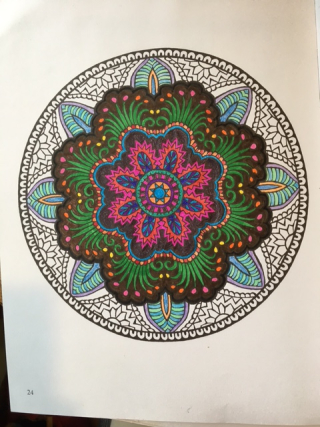 And holy pencils Batman! There it was!! 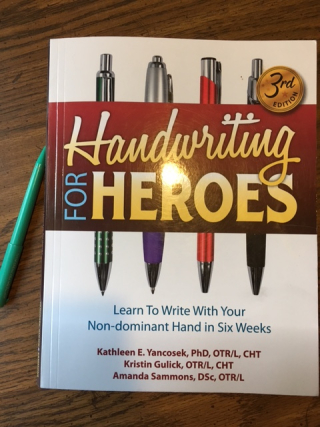 Handwriting for Heroes: Learn to Write with Your Non-dominant Hand in Six Weeks, by Kathleen E. Yancosek, Kristin Gulick, & Amanda Sammons. All the alphabet letters after their names mean that the authors are totally qualified in occupational therapy. These authors are gods. The bibliography in the book alone is impressive.

Handwriting for Heroes was originally written for people in the military who had lost the use of their hand which had been used for handwriting. It has grown to be used by stroke victims and many others: people who due to surgery or a short-term illness to their dominant hand have to write for their jobs, even people who just want to be able to write legibly with their non-dominant hand for the fun of it. I like it because finally I found something that made me handwrite, but without the hassle of going back to primary school.

For the past six weeks I have followed the course set out in the book. It is more like a workbook. There are various exercises in the pages to make me write every day, for about an hour. Yes, at first I had to take lots of breaks, and my writing really sucked. Right at the beginning of the book, at the top of the introduction, the authors say in big letters that you can't miss, in slightly more pleasant words, that your writing is gonna really suck out loud, that my hand will feel weird as hell holding the pencil, and this is gonna take a lot of time.

My writing really sucked at the beginning when I set down my goals for the week: 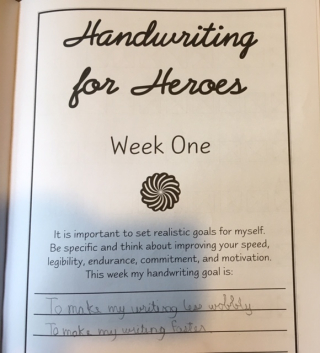 But bit by bit my writing grew to resemble normalcy: 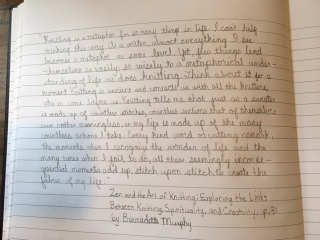 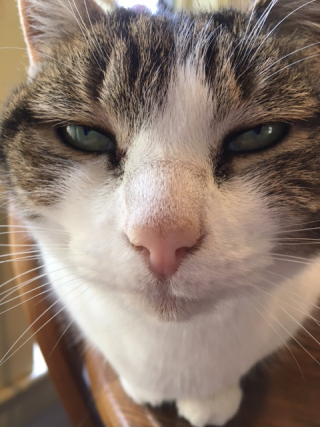 Time Flies When You Are Having Fun!

My goodness, is it May already?? Wow. 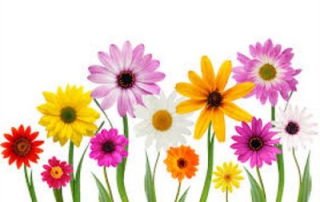 I finished a couple things. The red Mystery in March shawl is done: 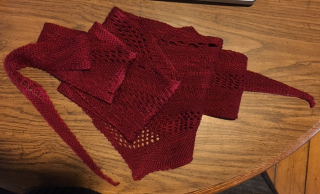 It's more of a scarf, a decorative scarf I guess. I like it quite a bit and it used up the red yarn I had, and I actually have worn it a few times. I finished it on March 30 but didn't get it blocked and photographed for about a week. 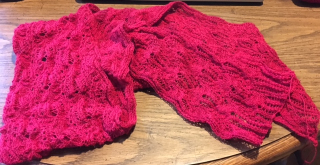 This has been in the works for nearly a year, though I sent it to hibernation for a good deal of the time to work on other things. It may turn out to be more or less than six feet long; I haven't blocked it yet. I absolutely love this scarf and the pattern was easy, once it clicked into place in my mind and I could just knit without any charts. 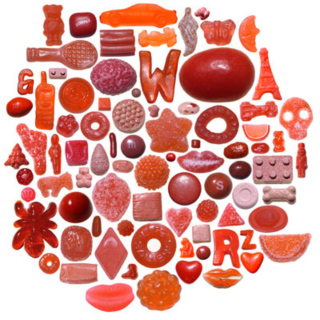 My project that is currently on the needles and going at a great pace, I might add, is a Hitchhiker Scarf made with Lang Yarns Jawoll Color Superwash that I got at the Harpswell Inn Knitting Weekend. 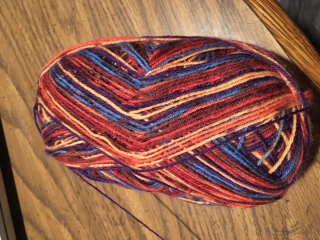 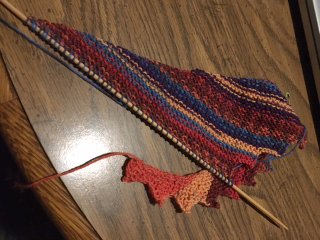 It is called "Hitchhiker" because in the words of the designer, "The name? Well, if you use a 150 g skein of Wollmeise 100% Merino for this, you can make how many teeth? That‘s right, 42. The answer to the question about the universe and everything, according to Douglas Adams‘ wonderful book „The Hitchhiker‘s Guide to the Galaxy“. So don‘t forget your towel, and happy knitting!"

Pretty clever! But I am not using Wollmeise Merino, so I don't think I will get all 42 teeth on my edge. We will see. It is knitting up very fast and unlike Amy's scarf, it is all garter stitch and easy peasy to knit. I love it!