Need a quick, simple counter that runs in your browser? Check out Scoreboardz! Designed to keep score for several people, it's a gaming device, but I used it for counting my increases on the sleeve of the little purple Aran Coat that I am making. I bookmarked it too, so I can use it in the future. It probably would not be my counter of choice for a whole project, because it may get deleted or the cat may step on the keys and increase the number astronomically. But for something simple, it's nice.

It can keep track of 12 people (or increases or decreases or whatever) and it has 10 backgrounds to choose from. Pretty cool, I think. Anyway, just thought I would share that with you. I'm putting it here in my blog so I can find it again in the event that I lose my bookmark!

Thanksgiving is behind us and we are starting to get into the spirit of good will and cheer. I finished the Christmas stocking that I was working on: 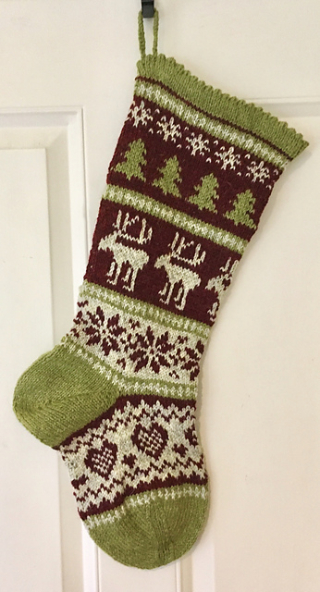 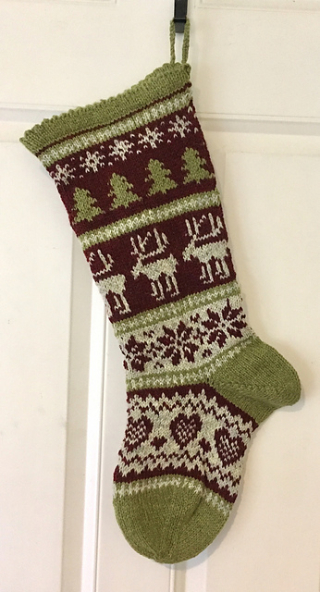 It's so pretty! I didn't buy the colors specifically for a Christmas stocking, but they work. I mostly used Arne & Carlos' Christmas Stocking, but I added Mary Jane Mucklestone's book 200 Fair Isle Motifs (#110, snowflakes) and Renée Kies socks pattern O Dennenboom for the Christmas trees.

I also updated the look of my blog. The flowers were looking a bit too flowery, so I streamlined the look, and made a new banner. I used a fabulous free font for the title: Kingthings Needles by Kevin King. There are lots of cool things on his site, and more fonts too. Go check him out!

Posted at 07:00 AM in Beth's Knitting Projects, Found on the Internet, Interesting Fiber Stuff | Permalink | Comments (1) 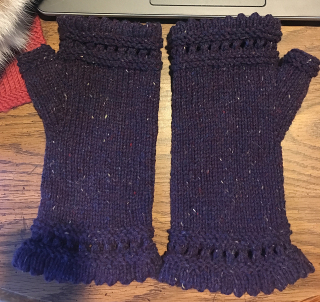 Purple fingerless mitts. Pattern: Sally Roger's Reading Mitts, by Sally Rogers. I used Jo Sharp DK wool. These would make a good Christmas gift! They were quick to knit and they look fabulous.

Next, I made some baby things for a baby who is about to be born. 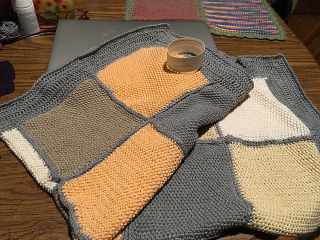 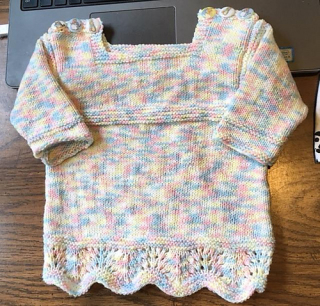 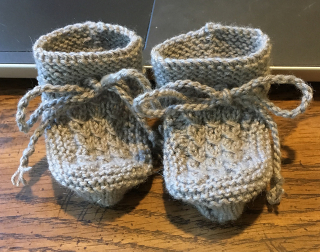 The baby blanket didn't have a pattern, but it was made from Rowan Purelife Organic Cotton DK. The sweater  is Oat Couture Victorian T-shirt by Annie Dempsey, and I knit it from Katia Mississippi 3 Print. I started to knit it right before I had my stroke, and I finally got to finish it! The socks are knit from Yankee Knitter #29 Classic Socks for the Family by Melinda Goodfellow, out of scraps from my sheep socks. The adorable booties are Little Eyes by Inma Gijón, and I knit them out of fingering weight cashmere that I believe was once something in a kit, but I am not sure what. Couldn't be cuter than those booties though! 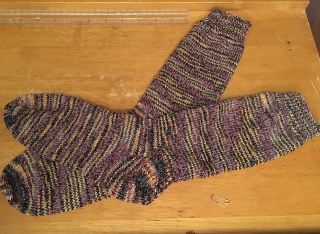 I made a pair of adult socks too, from Yankee #29, but they were from Tofutsies yarn that was in my stash. 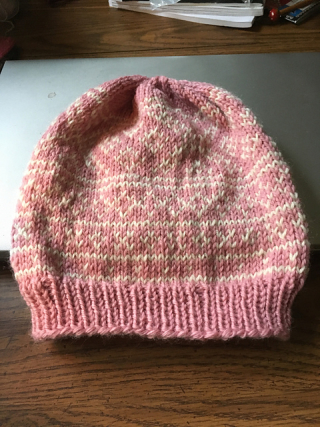 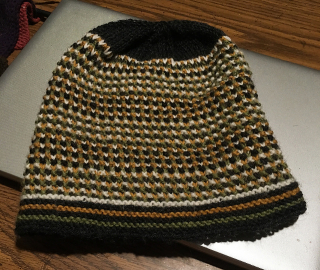 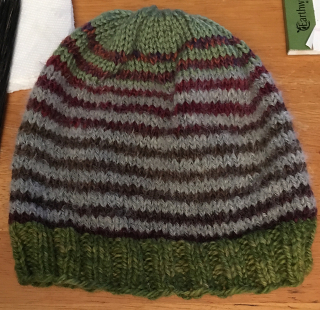 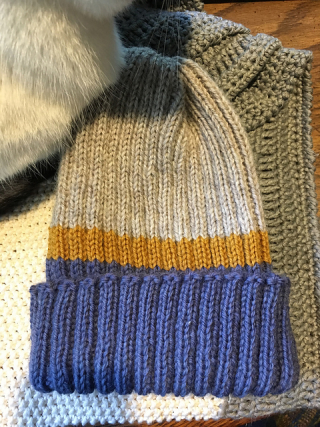 I've made six hats, but I only used two patterns: Storhedder, by Mary Jane Mucklestone (the two mostly pink hats), and Stash Slip Stitch Hat by Renée Rico (the green/yellow/black/white one). The others were just ... hats. All were out of scrap yarn! I have been on a hat kick lately, and I have a pile o' knitting ahead of me to use up. Remember the Mousies of Doom from a few years ago? Well, this is the same thing, but with hats. And no catnip.

Stuff I Am Doing Now:

The Aran purple coat keeps getting interrupted by other things, but it is moving steadily along toward the finish line! The back and right front are done, and the left front is about half done. I have bagged the idea of using old-fashioned techniques to knit it, in favor of snapping pictures of stuff that I need from the book and making a spreadsheet to keep track of the rows. Blame it on Pogo. She kept sprawling across all the lovely paper that I needed to use to knit, so I had to go to the screens. They are vertical.

This is the beginning of a Christmas Stocking for the two year old who got the sweaters. It is based on Arne & Carlos' Christmas Stocking (go check them out on YouTube and on their blog, they are a hoot! They have tons of useful and entertaining information too!). I have added pattern #110 from Mary Jane Mucklestone's 200 Fair Isle Motifs, and the Christmas Trees from O Dennenboom (socks) by Renée Kies.

Stuff I am Not Doing:

I am no longer knitting my Daily Mindfulness Blanket; it was turning out too heavy for a blanket and what I finished is now Pogo's daily mindfulness purring and kneading mat. She loves it. I think I will start it again in lighter weight yarn, not scrap yarn -- something DK or sport, with gradual color changes like Noro. That would be pretty as well as giving me a good project for mindfulness.

I unraveled my Ka'ana Shawlette too, for similar reasons. I was using a hairy, sturdy Aran weight yarn and the resulting fabric was too stiff and bulky and itchy ... I really couldn't see anyone cuddling up in it. The yarn is perfect for hats though! Woohoo! I'll use a different yarn for Ka'ana, something silkier and softer; it will be a joy to work with. I think I have something in my stash, in fact ...

Nanowrimo. Sigh. I finally got an incredible story idea, something big and broad and mysterious and delightful yet a bit scary, but I got the idea on October 31 (and it isn't a Halloween story either), which meant that I didn't have time to do any research but hey, that is life. Unfortunately the power was out, but I wrote for one day on November 1, and then my iPad died. And my iPhone died. And my computer died. It took a week for power to be restored ... so I decided that it was a higher power who decided that I should do the research and get my spiffy new idea good and ready for next year! So I will be all set for Nanowrimo 2018!

Posted at 09:12 PM in Beth's Knitting Projects, Ramblings of a yarndemon | Permalink | Comments (0)