Home Archives Profile Subscribe
Abayomi
If It Is Cold, It Must Be February

So I was reading in the forums on Ravelry, and I came across the Make Nine Challenge. Apparently I miss a lot by not being on Instagram: I have an account, but never use it at all. Anyway, the Make Nine Challenge helps bring focus to your life, set gentle goals, center yourself. People can set their goals on specific things they want to knit, or they can include things that they want to learn,  goals that they want to achieve ... goals can really be anything. Putting it in writing is a way of focusing your mind.

I thought it would be fun to try and come up with nine things in the world of creating that I wanted to do in a year, so I have made a list. I give it until January 30, 2020 to see if I do them all, some of them, or none of them. Some goals are very broad and general, and some are terribly specific.

(Sorry. Pogo got on the keyboard again. Sigh. ::shakes my head::) 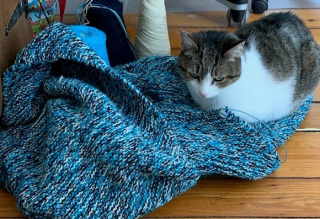