On my 60th birthday, I got an email from Wendy Gaal of Knitters Brewing Company that contained a discount code, so of course I had to use it!

Happy Birthday to me: 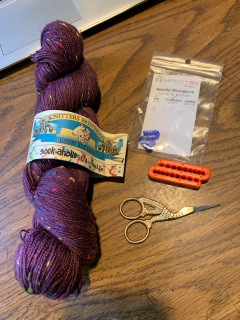 I got a skein of Confootie (love the name!) in the color of Imperial Barleywine, because you know I need more purple yarn, and also two Needle Wranglers to wrangle my needles and keep the stitches in place, and a lovely little pair of VERY sharp stork scissors. Wendy has a sock pattern coming out in July that maybe I will make.

In other news: I have been slowly picking at three projects, but I can't tell you about them til later ... much, much later.

Marie Greene's 4 Day Kal begins July 4. I have the pattern; it's called the Foxtrot Cardigan, and it's very pretty. I have some vintage stash to use for it too, it's cotton: Classic Elite Provence (now sadly discontinued) in a lovely periwinkle color (purple again!). But I don't know if I will do it. Right now I feel like if I manage to get the three things knit that are ongoing right now, that will be good and I will take a break for a while. Also, a cotton cardigan doesn't thrill me ... maybe because as I type this, I have a wool cowl wrapped three times around my neck because it has been so cold lately. Anyway, maybe it will feel more like summer in a few days. I hope so.

Fire in the Soul

When Notre Dame cathedral burned, I was very sad. So much history lost ... it was heartbreaking. A building that has been around for that long has so much human existence in it, as part of it. I found a pattern for the Rose Window hat on Knitty and thought, I will make that.

About a month later, I ordered some yarn from WEBS, a Debbie Bliss yarn called Botany Lace in the color 3012 Ronda which seemed like the colors in the Rose Window at Notre Dame; and I got a skein of Berroco Ultra Wool Fine in the color 5334 Black. I started to pick away at the hat. I worked on it amidst other things, but I finally got it done. Here are pictures of me finishing it, getting a wet blocking soak, and the finished hat. 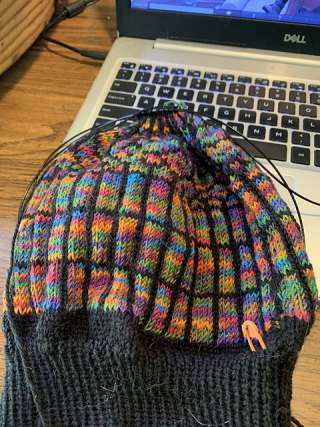 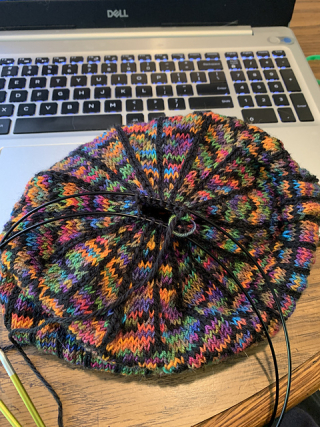 I used two circular needles to knit it, and I liked that quite a bit. It is not as fiddly at the top as four double pointed needles would have been. 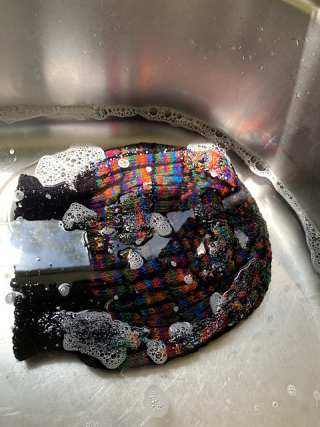 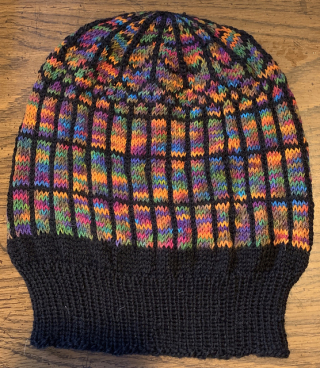 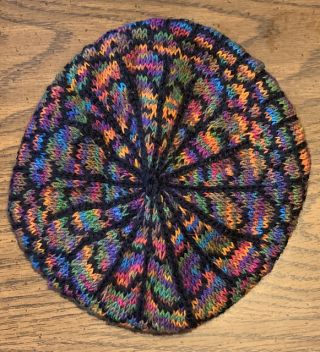 As someone who likes history and who has taught it, I was going through a grieving process over the cathedral's burning. Also, my home town of Portage Lake has an abundance of Catholic people in it, so I identified with the horror of it. And my house burned when I was in high school, so that was a bit of the feeling too. Knitting this hat helped me to settle with it, and I was really glad that the rose window was saved. I loved knitting this hat, and I might make another one with the black in Swan's Island yarn.

When my sister in law mentioned that my grand nephew liked penguins, I squeed a squee that would make a squeemaster proud! I love penguins! So I scurried off to find penguin patterns for a small boy, and I discovered some patterns that were already in my favorites for hats, mittens, and other things too. Did I mention that I love penguins??

There were a few penguin pullovers that I found which would be cool to knit up: 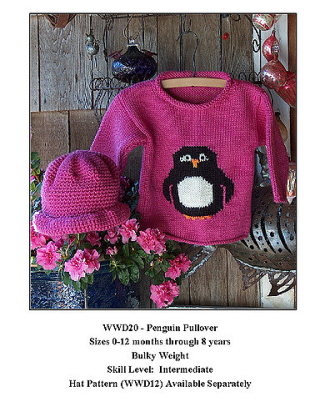 Penguin Pullover by Cathy Pipinich ($6.00) has a charming penguin on it. It uses bulky weight yarn and would be a quick, warm knit. 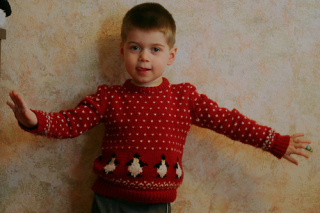 Penguin Pullover by Hélène Rush in her book Maine Woods Woolies has always been appealing to me, and I have the book on my bookshelf too! It is sadly discontinued now, but I bet you can get it through interlibrary loan. 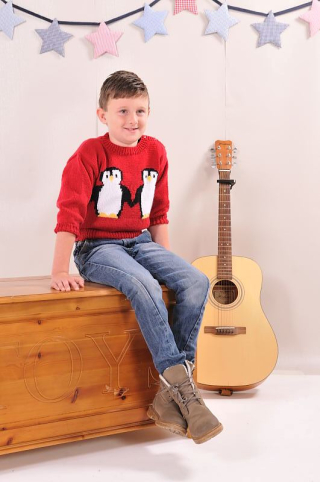 Penguin Jumper by Wendy Yarns is in an issue of Knit Now magazine. What better way to use old magazines than this? The two penguins holding flippers is just adorable. 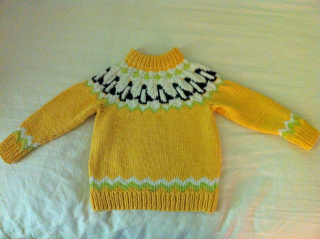 Mörgæsir/Penguins by Linda Konráðsdóttir is  Aran weight Icelandic yoke sweater with a ring of penguins! Who wouldn't be happy with all those penguins around! Mörgæsir/Penguins is available for free, in English, on the Istex Lopi website. 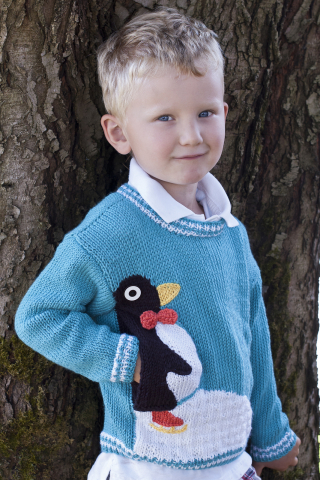 I am inordinately happy with this Penguin Pullover by Amy Bahrt. It has a pocket! In a penguin! With a bow tie! What is not to love?? This has to be my favorite of all the penguin pullovers, and I just might make all of the penguin pullovers anyway. Be forewarned: there will be a plethora of penguins coming to a house in Appleton. Oh, and this design is free on the Cascade Yarns website too! Direct link on the Ravelry page :)
I am giddy with penguin happiness, flippers at the ready with yarn and needles!