A long time ago, when I was a young thing up in Aroostook County, men needed warm socks to work in the woods in the wood-cutting business, or on the farm, and to wear hunting. They were knit in Aran weight wool using needles that were much smaller than is usually used, making the socks practically bulletproof. At the least, they would keep out the cold. (So thick they stand up on their own!)

Fall's arrival  triggered sock knitting among the women, and the yarn they used was worsted wool which actually came from Canada (likely McCausland's Woolen Mills in Prince Edward Island) in natural off white for the foot, with a dyed color, probably red or green, for the leg. The dyed colors would show when worn, and they were more expensive and thus treasured more. The foot, which was hidden in the boot and which wore out more quickly, was knitted in the cheaper natural yarn, and was removed several times over the course of the sock's life as it wore out from wear.

The pattern was memorized and rarely written down. That's how I learned it ... but I wrote down the pattern for a friend many years ago, and it's a good thing too, because I can't remember it now. It's a men's sock pattern, knit very tightly with size four needles and heavy Aran-weight wool to make socks that are nearly bullet proof. I have knit it in one color of Bartlettyarn. 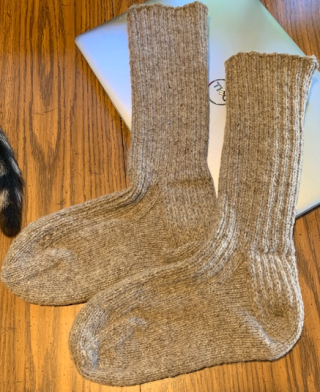 Divide work so that 32 stitches are on one needle (heel needle), and 11 stitches each are on two needles.

Join work into a round again:

Work even (pattern on upper foot and stockinette on the bottom) until sock reaches 8 3/4", or 2" less than desired foot length. The best thing is to measure the wearer's actual foot.

Repeat these 2 rounds until 22 stitches remain. Knit sts on needle 1 onto needle 3 (11 sts) and leave remaining sts (11) on needle 2. Graft the stitches together with kitchener stitch. Weave in ends. Make second sock.

Posted at 06:00 AM in Free Patterns, Ramblings of a yarndemon | Permalink | Comments (0)