A Knitting Weekend at the Foc'sle

I just had a great knitting weekend at Wendy's house, a.k.a. the Foc'sle, filled with tons of knitting, good food, good company, a lovely dog, and a cuddly cat. It happened that everyone who was there either was currently or had been a teacher, so of course education was the focus of conversation. The best part was that we had taught at nearly every level, from preschool through college and adult ed. The conversation was intriguing and enlightening and, I hope, helpful. It is amazing to me what one can learn when we get a bunch of women together who are freely conversing.

We also talked about a ton of knitting. I learned some things and taught a few things, and everyone knit, and some people finished some projects! I worked on Shedeer, which is a DK weight shawl, and I'll have pictures of it when it is done. Right now, it is scrunched up on the needles, curled up tightly, and not being very photogenic. It will be better when it has been washed and blocked. It's an interesting pattern, and I do like how fast a DK weight shawl knits up! I started it before I went to the knitting weekend because it is mostly plain knitting, a good project for talking and putting down a bunch of times without worrying about losing my place in the pattern, and I got it about 85% done over the weekend. So fast!

October is finished, and I am halfway through my pink shawl:

So pretty. Every month draws closer to the end. I hope Mari-Liis does another shawl for next year, because I will miss my two rows a day.

I started a ripple afghan with my odds and ends of worsted weight scrap yarn. It's crocheted, which I should do more of. It makes good TV watching too. You only need to count to 14 and then do something and then do another 14 and do something else: 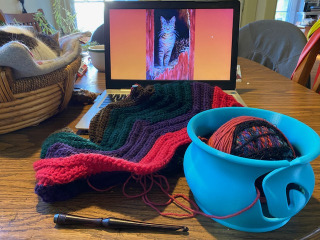 See the yarn in my yarn bowl? I got tired of weaving in my many ends as I went, so I tied my scraps together and made a huge yarn ball as big as I could hold with one hand. It cuts down on weaving in ends! I joined them together with a magic knot, the perfect join for this project, because it's only an afghan for me and I don't care if the knot pops through, and it's reversible anyway.

Another project that I started is a Jenny Hat by Jo Sharp. It is in Jo Sharp Handknitting Collection Book 5, Gathering, which was in Unique One years ago, and I pulled it out while looking for a hat pattern that would use just 50g of DK weight yarn. I have some yarn that Arline spun that weighs just 49 grams and is sort of DK to worsted weight. I figure I'll knit with it as far as I can, and then change to another color for the top if I don't have enough. 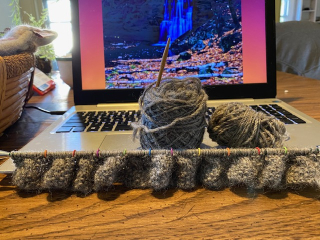 The hat pattern, as most of Jo Sharp's hat patterns are apparently, is knit flat and seamed up the back; the seam will invariably become situated right in the center front of the wearer's forehead, I am certain. Anyway. I started it in the round, because duh. Who wants a seam in their forehead. But I didn't rewrite the pattern because I was too lazy, and after I had screwed it up beyond recognition, I said the hell with it and just started knitting it flat the way it was written, because I am too lazy to rewrite the frigging pattern. So whoever will get this hat just has to be ready to have knitters pointing and laughing if they are not clever enough to keep the seam off their forehead.

Am I bitter? Yes, yes I am, because I AM TOO LAZY TO REWRITE A PATTERN.

I love Arline's yarn though. It's a three-ply and perfectly plied, and it is very soft. The hat has a nice little halo over it from the yarn, quite like Arline's halo ♥

Oh Elizabeth, you have changed one darn bit... I am sitting here typing away with a big grin on my face... Love what your are knitting and i am so sorry about the hat pattern. I don't believe you are too lazy to rewrite a pattern.... :-) Load you loads... Sharon the Enabler

Sharon, thank you! I think of you often! You know, I believe the badly plied purple yarn that my Diagonal Rib Scarf is knit from was originally fiber I got from you when you had that big sale before you moved to Nova Scotia. I thought of you the whole time I was knitting it!