End of the Year

My Anna Karenina shawl is blocking: 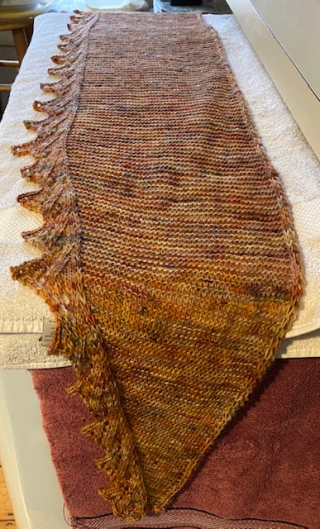 I didn't pin it down or even pin the points out. Why? It takes a lot of work to pin all the points out; if it were for someone else, I probably would have. There's a bit of an oooh and ahhh factor to prepare for a perfect gift presentation, even though I know that a) they may never actually wear it and 2) if they do wear it, the points will not remain perfect. That's just the way it is. I was making it for myself, for warmth, and I plan on wrapping that sucker as tight around my neck as I can; blocking out the points is useless.

That's my last finished object of 2019. I plan to spend the next few days working on my ripple afghan using scraps of worsted-ish weight yarn (it's half done)...

... and work on my new scarf project, the ZickZack Scarf. It is one way to use up some scraps of sock weight/fingering/baby weight yarn.

This is just the small balls of leftover yarn. I have a much, much larger bag of bigger balls of leftover sock yarn, each weighing 65 grams or more. I can make a hat with 60 grams.

I've been quietly knitting away on some little things, getting ready to become the Sweater Knitting Monster of 2020. (More about that later.)

I knit a pair of simple socks out of that bamboo blend yarn:

They are lovely, silky and soft. I bet they will stand up to a lot of wear too! They were donated to a local church for their clothing drive for the homeless.

I finished the Jenny hat out of Arline's handspun: 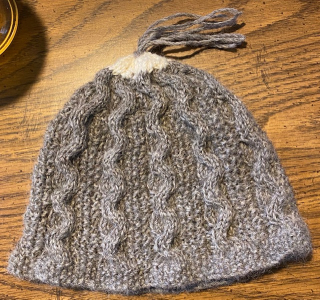 I think it is very pretty! It is a tad small, but I fits me. I think with a little bit of wearing, it would mold itself to the wearer's hat and fit just right.

I finished a pair of fingerless mitts: 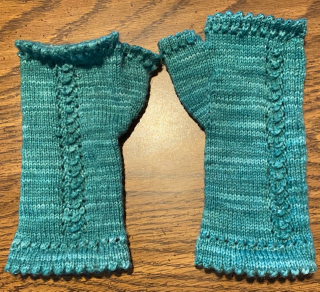 These are Half-Day Off Mitts by Sara Lamb in the Piecework Magazine - Return to Downtown Abbey: A Special Tribute; the yarn is On the Round Everyday DK, Superwash Merino Wool, Color: Turquoise.

I love these mitts and I've worn them practically every day, all day since I finished them on December 14. They fit so perfectly, not too tight, not too loose. I adore the turquoise color. I love the delicate panel that runs up the back, and the sweet little trim at the top and bottom of them. I love how warm they feel. 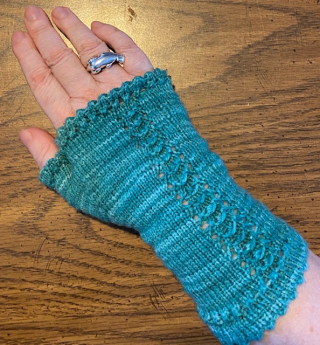 They are just about the most perfect thing I have knit for me in a while!

Right now I am crocheting the Scrap Yarn Ripple Afghan that is 30% complete, and knitting a shawl that is just shy of half done. The shawl will likely be the last finished object of 2019. Then, the sweater monster will rear its head! Hear me roar!

So, I was curious to see how my "resolutions", my Make Nine list for 2019, was progressing. (See the original list here.) 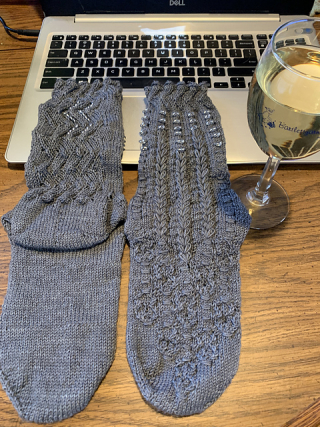 These socks were somewhat unusually constructed, and had interesting and kind of hard stitches to do. I enjoyed doing them!

5. Become accomplished at knitting brioche. I didn't do it, but I tried. I worked on the brioche class on Bluprint until I thought, why aren't I knitting? It was the brioche mitts that were the project, but it wasn't that I didn't like doing brioche ... I just had to say, I didn't like the mitts and I didn't like that the mitts were all gawmy and, well, ugly as hell. So then I started looking at other brioche things to knit and found that I didn't really like the looks of them either. I guess that I just am not a huge fan of how brioche looks. So I didn't finish it. The only brioche things that I saw that I liked were simple scarves, some hats, and a couple sweaters that I had actually knit myself in the past. I crossed brioche off my list, and I was fine with that. Life is too short to learn skills that I don't like and won't use, and there are many other things that I want to learn.

Intarsia is like brioche, in that I don't like doing them, but if a design is very, very, very, very beautiful or cool or cute, I will knit it despite not liking it (Map of the World sweater, I'm looking at you!)

6. Design two patterns and put them on my blog. Well. I kind of did it, and kind of didn't. I knit an old pattern and put it on my blog with a picture and revamped it (Diagonal Rib Scarf), and I did a wicked simple scarf pattern (Simplest Scarf in the World) and I did the County Socks too, for which I had the pattern written down years ago. But I really didn't design a clever thing. I have a file full of ideas, nineteen of them in fact. And those are just the ideas I have written down. I can do better next year.

7. Knit the Selbu Modern hat, which has been in my Ravelry queue for ten years (March 26, 2009). Nope, didn't do it. As a matter of fact, I decided I really didn't want that hat any more, so I simply crossed it off my list. How freeing!

8. Knit Saxony Socks by Lisa Lloyd which have also been in my queue for ten years (December 10, 2009). Nope, haven't done it yet, but I still want to. It will go on my list for next year.

9. Crochet a garment. Does a doily count as a garment? I guess not. Sigh. There are some great crocheted sweaters and shawls out there, I just have to pick one. Next year!

Of the nine things, I finished five of them, kinda finished one, threw two away, and flat out just didn't finish two. That's not bad; some accomplishments, some room for improvement, and I learned from the brioche that I didn't like brioche, and I found that the hat was just not for me anymore. I don't feel bad about any of them. Now to think about my Make Nine list for next year!

I love Christmas. I love checking out each day on my Jacquie Lawson advent calendar online, and opening each little door on the DROPS advent calendar to check out the lovely Christmas knitting and crochet.

The pattern had a chart. I hadn't followed a chart for crochet since about 1979. But lo, what wondrous sight did I see? A video about how to crochet the WHOLE DOILY! I could simply watch it and follow along! Woohooo! 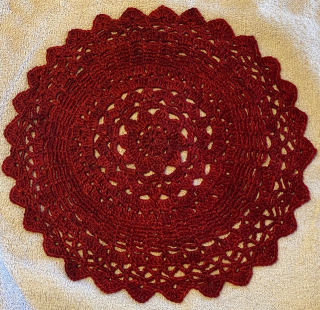 It suits my table just right! 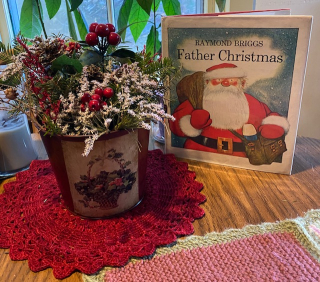 Hope you are having a wonderful Christmas season!

I feel so virtuous.

A few years ago, maybe five? six? more? Judi stopped by and gave me some Peer Gynt yarn she was cleaning out, and she said, "Make something pretty with it." So I found a pattern for it (Shedeer by Brian Smith), but then I just kept putting it aside as other things pushed into the front and got in the way. But when October and Wendy's knit-in rolled around, I knit most of it, finished it up after the knit-in was over, and blocked and dried it. I'm so happy with how it turned out! 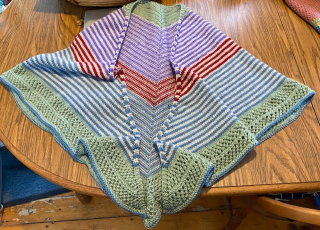 I love it! Thank you Judi!! 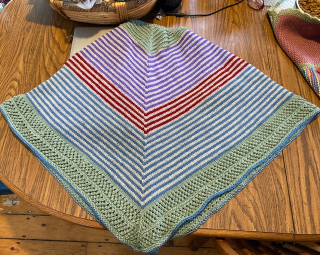 Peer Gynt is a DK weight 100% Norwegian wool, soft and comfy. It's a real work horse kind of yarn, good for sweaters, mittens, socks, hats, pillows, afghans, pretty much everything. It is really good for stranded Norwegian patterns as well as anything with a texture or cable. It is a really warm yarn too!

I had a couple skeins left over, red and purple, so I made this cowl: It's the Camden Cowl by Mary Jane Mucklestone. I wore it for a few days after I made it, and found it to be really warm and not itchy -- but then, I am highly wool-capable-of wearing, wool  doesn't make me itch at all*. I really like this cowl. The colors work surprisingly well together. Plus, it makes me think of Rachel, who was in the Red Hat Society and loved it, so anything red and purple makes me think of her.

*Except any yarn with any amount of alpaca or llama. I can knit with this luscious, wonderful yarn, but I really cannot wear it; it makes me itch like crazy!

Wow, where did that month go?

Here's my progress on the Estonian shawl that I am knitting 2 rows a day, 5 days a week: It's getting longer, month by month. At the end of December, I'll be three-quarters of the way done. It will finish up when I am halfway through the month of March, I believe.

I knit a couple hats, finished my Shedeer Shawl, and worked on my scrap yarn ripple afghan in November. I did some finishing work for a friend; she had around 18 things that were taking up room, just waiting to weave in ends and sew a few seams, and I finished them for her. She was the same friend who came to my house for a few weeks after I had my stroke and helped me to relearn cooking and helped me find myself again. She got me started.

Mostly I have been looking around for patterns and yarn and making lists of What To Knit for the next year. That list is getting longer and looooonger, but it uses up lots of yarn in my stash! I suffer from SABLE (Stash Acquisition Beyond Life Expectancy), so I always try to use up my stash wherever possible. My aim is to get all of my stash to fit in one chest in the living room. It's do-able, between knitting and donating and throwing away. Next spring, when it is warmer, I'll have to dive into The Yarn Room upstairs and clean it out. Should be fun!