Home Archives Profile Subscribe
Barley Water and Sweetcake and Socks, Oh My!
Cozy Knits from the Coast of Maine

I've gotten hooked on train rides from various places around the world via YouTube. Since I am highly unlikely to actually get anywhere in say, Norway, I can just pull up a video on YouTube! Best of all, I can enjoy the snow without actually being cold!

So, I was watching a video from RailCowGirl who does mostly train rides in Norway, and it was a trip called Nordic November Sunrise from Bergen to Voss which I didn't pay much attention to, but it was early morning, the clouds in the mountains were pretty, and there were MANY tunnels. I like the names of the tunnels. One was called Trollkona (Troll's Wife Tunnel) and is 8043m long. 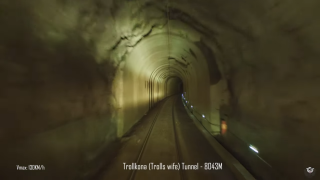 But the best part, and a complete surprise to me, was when Dale was one of the stops on the route! Dale of Norway! And there was a Dale factory store right next to the train stop!

That's the next best thing to being there in person. Dale of Norway makes wonderful yarns and beautiful sweaters, both of which were sold at Unique One. It made me happy to see them.

Have fun riding the rails! You'll never know what is around the next bend!