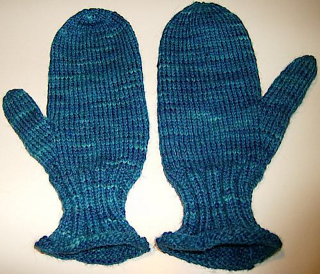 Continue, increasing one st in first and last st in thumb gore every 3rd round until there are 13 sts. in the thumb gore.

Knit 2 rnds even. Slip thumb gore sts to a piece of yarn to hold them.

Cast on 3 sts at beginning of next round and continue working in stockinette st until 6 inches above ribbing, or 1" less than total desired length of mitten.

Break yarn, leaving a long tail. Draw tail through all sts and pull the sts together. Weave in tail on inside.

Slip thumb gore sts onto two dpns. With a 3rd needle pick up and k 3 sts over the sts cast on over the thumb gore opening. (16 sts for thumb).

On first round of knitting, redistribute sts evenly on three needles (5, 5, and 6).

Knit around until thumb measures 2" above cast on sts. Dec 1 st in last round (15 sts).

Dec for top of thumb:

Knit one round even.

Next rnd: K2tog around. Finish as for top of mitten.

Work the same as for Right Mitten except when you increase  for the thumb gusset, do as follows:

Weave in ends. Block, if desired.