A FREE Pattern for 24 days! (Click the link below)

♥Merry Christmas♥ Knit and Be Happy☻

Another Sylvi Update and Other Projects

Sylvi is growing by leaps and bounds. The back is done: 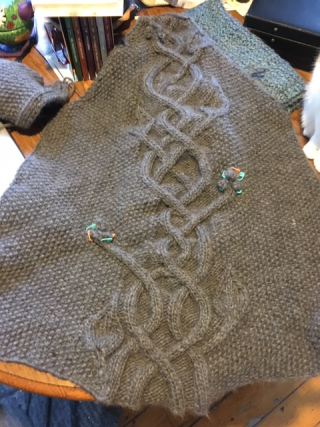 I have the left front done to just above the underarm:

The black yarn on the side marks the increases, and the one in the middle marks what row I started the underarm on.

Pogo the astute feline inspector says they pass and gives them a paw print of approval.

Everyone needs bright glittery socks What a wonderful world it would be if everyone wore them. The yarn is Plymouth Yarn Stiletto, purchased from WEBS, but it seems they are out of it. I did buy it in their big year end blowout sale. Anyway, the pair is half done, and I start the second sock tonight during my daily TV watching. The pattern is the one that I have pretty much memorized, Classic Socks for the Family by Melinda Goodfellow.

I got a knitting magazine (KnitsceneSpring 2017) and a skein of lovely purple Wildwood Arcadia yarn from my friend Lynne! I started the Ironwood shawl, and it is perfect for the yarn. I love both the pattern and the yarn!

For Fun: Two Games for Your iPhone

I got a new iPhone recently -- my Verizon plan renewed and I traded in my lowly iPhone 4 for a new iPhone 6+, and therefore I needed a couple new games to put on it!

I looked in the app store and found Sailor's Dream, by Swedish Developer Simogo AB. It is a 'game', sort of, but there are no points to win, or  monkeys to jump over or angry birds to squawk at you. You wander around finding clues, memories about something that happened in a cottage by the sea. The thing is, I found myself getting sucked into the world, the sea, the beauty and peace of it, the music... the music is so hauntingly beautiful. This game is as much an interactive album as it is a game.

This takes at least a week to play; you get a bottle containing a song every day for a week. I found to my chagrin that if you miss a day, you will have to wait for that day to come around again! I have found all the bottles, but I am still trying to figure out how to get to the last part of the game ... but not very hard. I like just wandering around on the sea!

This game would be good for anyone touched by the sea. If the ocean feels like part of you, you will probably get sucked into it like I did. Sailor's Dream costs $3.99, about the same as a pattern on Ravelry. And it's so worth it.

The second game I bought is Monument Valley by UsTwo. It has a little girl (Ida) running around and squawking birds that are crows, but it is so much more that that! This game is a piece of art as much as a game, an Escheresque-world that you walk through, encountering harmlesss but noisy crows that keep you from getting where you need to go, and giant yellow totem-pole-like friends who give everything for you. This puzzle game is simple, beautiful, mind-bending in the nicest way, and it really makes you think. And, it is fun for all ages to play, from little kids to adults, who can play together, solving puzzles and helping Ida get where she needs to go. It has been a long time since I experienced a game like this!

The art work has simple lines and colors, which set it up for being like an Escher painting that you just walk into and play in. Fans have made a gallery of Monument Valley art which you can see at Monument Friends. The game costs $3.99 for 10 chapters, with an expansion pack that is $1.99 for an additional 8 new chapters (such a deal!), and I just found out today that Ida's (Red) Dream is available until December 7 for 99¢, the proceeds donated to fight AIDS. I snapped that up right away! I am lingering over the last chapter in the expansion pack, but now I willl have to finish it, I guess :)

OK. Back to knitting!

Adventure games have been a big part of my life, especially Myst and Riven, two games by Cyanworlds.

I loved Myst when it first came out. We had just had a new-fangled thing called a 'CD-Rom' installed in our Apple computer, I think it was a Quadra or something. We fired it up and fell into the marvellous world that was Myst.

A little later Riven came out; it was even more beautiful than Myst had been. Wahrks sunned them selves on the beach; I used to just sit in this one place I found, high up, and take in the sights and sounds of this make-believe world. For me, it wasn't about solving puzzles or finding answers, it was about the beauty of the world. From then on, every game that came out from Cyanworlds, I pretty much just read the walkthrough to get to see the beautiful images (sorry, puzzle-makers of Cyan, the game just got in the way of ... the game).

It was my ideal picture book, with sounds and sights, with my lights turned off and my earphones on, I could go to Riven (or whatever made up world it was that day) -- no matter if I couldn't smell or taste or feel anything, it seemed real to me.

Still does. Now I have Myst and Riven on my iPhone. Can you believe it? The fan community used to laugh at the idea when it first arose, long before there was such a thing as apps for your phone. I still go in, and I still don't solve the puzzles, but I enjoy the scenery.

Maldiva glared at the empty glass on the table, and kept knitting. Her hands would hurt tomorrow, but she'd finish this shawl if it killed her. The edging was flying off her needles so fast you could barely see her hands move. She wished she had some Scotch. Better yet, she wished she had a great big chocolate milkshake, or one of those iced things from Dunkin' Donuts. She knit another few stitches and dreamed about it.

The knocking on the door roused her from her choclatey-icy goodness, making her scowl, but she kept on knitting. They'll likely just go away if I am really quiet, she thought. Then she saw some eyes peering in through the window, and finding life, they quickly resumed knocking.

"Maldiva! I know you're in there! Let me in!" Rosie's voice came through the door like a battering ram, making Maldiva flinch. Getting up, she threw open the door and Rosie impatiently brushed past her and flopped on the couch. Maldiva went back to her chair, scooped up her knitting, and resumed knitting.

"Maldiva. They've done it. The harpies have finished Torchon! In two days!!"

Maldiva's hands hesitated, but kept on knitting. "I knew they would. It was just a matter of time," she replied.

For a few minutes, there was only the sound of clicking needles in her hands, the rhythmic sound that was regular and had a certain beat to it. Then Maldiva put her knitting down with a scowl, and said, "Come on."

"Where are we going?" Rosie asked, breathless, but her eyes were shining. Maldiva was going to make lace-knitting history.

"To the yarn store. One of you girls is going to be a hero, and I'm going to coach you. Now come on!"

Hehe. I'm so bored. Anyone want to finish this story for me? Or at least the next installment?

Beth picks up her knitting and smiles.

Last night was a TV marathon night. We watched two episodes of Midsomer Murders and four episodes of Dr. Who (Chris Eccleston/Billie Piper), and by then it was midnight. We heard fireworks, but didn't see them. It was a good New Years! And we drank only coffee, despite there being wine, bourbon, and brandy in the house. All in all, it was fun.

I bought some new games for my iPad: The Adventures of Tintin, Bug Chucker, and Stoneship. I would have gotten Riven too, but the reviews weren't great; I am waiting. Bug Chucker and Stoneship are from Cyanworlds, the same people who made Myst and Riven, but they are more video-arcade style in appearance. (Bug Chucker is free for Android right now!) It's gonna take me awhile to figure them out, but for only about $4 per game, I wanted to support them even if I can't figure out the game. (I am terrible at games.)

The Adventures of Tintin is much more my style, and I quite like it, but for the feature that almost makes it unplayable on the iPad. At various points, you have to run, rather than just walk, to go further, and the "Sprint" button is on the opposite side of the screen from the "Walk" button. Unfortunately you have to hold them down at the same time to make little Tintin sprint, and I only have one hand that works. I can stretch my hand far enough to get him to sprint, but sprinting in the right direction is  almost impossible! It was quite comical having Tintin running around in circles, though. After much trial and error I succeeded in getting Tintin where he needed to go, but perhaps this game would be better played on the iPod rather than the iPad for one-handed people like me!

My vest is going well; apparently it likes TV marathons:

I am almost up to the armholes on the back, and I have used a little more than half of one skein, so that's good. I actually don't like the bottom ribbing, but it doesn't flip up, and I do like that. I can't think of anything else that would look good as a bottom treatment either, so I guess it will be fine.

It's a beautiful, sunny day for the first of January 2012, a good omen for the year ahead! Happy New Year!

Posted at 10:46 AM in Beth's Knitting Projects, Games, Ramblings of a yarndemon | Permalink | Comments (5)

Okay. First you have to go here and play with this little drawing game called Line Rider. You draw a line and try to make the penguin toboggan along it without stopping or crashing or whatever. It's harder than it looks! (A broadband connection will make this a whole lot more fun, by the way).

NOW you have to go here and look at a video of a very cool James-Bond style toboggan escape that some multi-talented dudes made with this game.

I can't decide which I love more... Flash games, or James Bond. Or penguins. Did you see the adorable scarf that little guy is wearing???? Somebody who loves him very much knitted that for him, I am sure. :)